The CES, also known as the Customer Effort Score-question, is a question type that shows how much effort it cost for your client/relation to work with your company. A question type that will map your client loyalty. Because: if something costs little effort, the client is likely to return!

Whoever already used the CES question in his/her survey, will definitely find this new update worth a try!

The first CES option to use, is based on the question “How much effort did you personally have to put forth to handle your request?”. To answer this question the recipient can choose between 5 smileys, of which the leftmost is red and means “Very high effort”. The rightmost smiley is green and stands for “Very little effort”.

Following the smileys, another question appears. This second question is based on the type of smiley given. This question varies from “Why did it cost so much effort?” up to “What made it so easy for you?”. 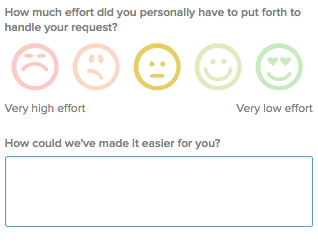 Although the CES works well and gives valuable responses, there's still room for improvement. Some points of improvement:

The CES 2.0 is the upgraded version of the CES. In the CES 2.0, you can see that there are 2 extra answers added, which makes the responses clearer and easier to analyse.

The triggered question still depends on the answer given in the previous question.