Starred account and company settings are all English but your contacts who will provide feedback may speak another language. It therefore makes sense to offer them your survey in their native language: the easier it is for them to fill in your survey, the better your response rate will be! This is why we offer Starred invites, surveys and Thank You pages in 22 languages.

Setting the language on the feedback form

When you go to create a new form, we’ll ask you in the pop-up which ‘base language’ you want to add to the form. The base language is the form’s main language which will will always show on the form composer when you edit and make changes. 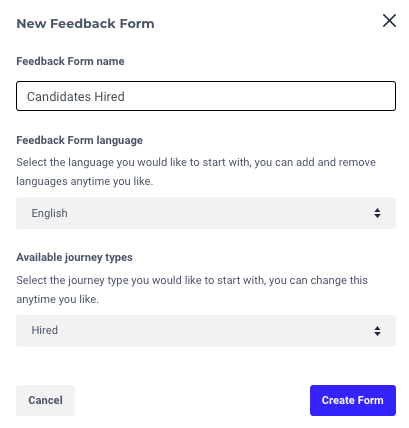 Now you’ve set the default language for your form, you can start working on the form itself! In the form composer, you can select a language from the dropdown menu in the top-middle of the screen. In the first place, you’ll see the base language. Click on Language settings to add or remove other languages to the form.

Ultimate Questions NPS and CES we’ve already translated for you, and there aren’t any further possibilities to amend the phrasing of the follow-up questions. You’ll have to enter translations yourself for all other questions that you’ve first made in your base language and then need to translate.

To translate each block, first select the language you want to add. Next click the relevant question block which needs a translation. You’ll get a pop-up which displays the new language on the left, and the base language on the right.

All results per question or star rating will show in one dashboard. Therefore it’s very important that you’re consistent in making your translations retain all the meaning of your base language.

When you’re finished editing your questions and adding translations, hit ‘save’ and you’ll have entered your first translation! When you need to add more languages, just repeat the process :)

Important: When you’ve used a survey from our SurveyStore you’ll find we’ve already added 2 base languages: English and Dutch. All other languages you will be able to add yourself using the steps above.

Now that you’ve added extra languages to your feedback form, it’s time to invite your contacts in the corresponding languages.

If you’re inviting manually it’s important to separate your invites into one batch per language, because each batch you send is going to receive the same invitation.

The base language of your feedback invitation will be the base language in which you’ve created your form. Adding extra languages is possible by clicking on the dropdown menu below ‘Template’ top-left on the screen. Next select the template you want to edit and choose to Add language.

The text for the extra languages you’re able to edit yourself. Don’t forget to hit the save icon when you’ve made changes to your template’s new language!